This post is brought to you from the beautiful little mountain town of St-Vallier-de-Thiey in the maritime Alps, around 30km north of Cannes. Following immense indecision after our breakdown in Italy, in the end we tossed a coin to decide which direction to head – east to Greece or west back to France. When it landed on France we both breathed a sigh of relief – irrevocable confirmation that it was the right decision! I love that tossing a coin will always reveal to you your gut instinct one way or the other, even when it seems you can’t possibly decide – had it landed on Greece I’m sure we would have casually said, ‘best out of three?’! We had heard rumblings of neighbouring countries closing their borders with Greece and felt we’d heard enough rumblings from Moksha already on this trip to voluntarily head towards the epicentre of any more…

So, after a brief drive due south through the beautiful Lugana region of Italy to Genoa, we were very soon back en France, armed with a somewhat better grasp of the language and with a list of French Mercedes dealers in hand. Drawn by its alluring spiral logo (I am a sucker for spiral symbolism), we headed straight to Sospel, a gorgeous mountain town in the beautiful Mercantour national park, where time seems to have stood still since Medieval times. The spiral lure did us proud, and we celebrated Chris’s birthday there (I even made him a Moksha cake – it was a disaster but somehow that seemed quite fitting) and had daily walks in the hills – and finally we began to feel the first fluttery feelings of actually being on holiday – wonderful!

However, before long the lure of the Mercedes dealer became too strong and we hotfooted it to Nice in order to panic-buy lots of spare parts to hopefully avoid another ‘Como’. One thing I’m learning on this trip is that, when travelling in a ‘classic’ vehicle (at some point I will stop using inverted commas for this but, for now, I feel it adds gravitas to what could otherwise be mistaken for a rusty old truck), the vehicle is very much part of the gang, and in fact seems to hold more sway than anyone else about where to head next. We seem to feel twitchy when we’re outside a certain radius of a known Mercedes dealer, and have already been to four different dealers across three different countries on this trip – Moksha is turning out to be a bit of a diva it seems! But, once you get your head round this fact, it doesn’t seem to matter so much – it’s just the way it is. You can either fight it, and suffer, or accept it and go with the flow. In a way, it gives a novel structure to the travels and, potentially, a mellow, stop-starty pace, depending on breakdowns. And it means you get to see ‘off the tourist trail’ places, such as out of town industrial estates and local scrap yards. I feel I might be able to write a guidebook for Mercedes fans by the end of this trip… 😉

Anyway, having successfully purchased all spare parts that might be required at a later date (except for the one that falls off next, probably, but such is life…) we’ve since landed in this quaint town in the grand-sounding French Riviera. When I hear that phrase I think of yachts and folk in white chinos slurping oysters and champagne. Instead, we find ourselves in another ancient feeling Medieval town at high altitude where life seems to operate at the steady, predictable pace of a GCSE French text book (it’s amazing how many of those conversations you learn turn out to be actually really useful!) and where traditional shepherding is still a real way of life – they even have flocks of sheep loose on the hills, accompanied solely by sheepdogs that are born amongst the sheep such that they believe they are one of the flock and are therefore naturally wired to be protective of their pack and warn off predators – amazing. We’ve found some old druid stones and we’re enjoying the bright, blue sky and snow-capped peaks in the distance.

It still slightly feels like the universe is nagging us – but as to whether it’s telling us off for not listening to it, or giving us a serious test in trust, we’re still not sure. As an example, whilst parking up last night, Moksha became a bit stuck in the wet grass, as she loves to do and, as Chris manoeuvred her out of trouble, I noticed the roof-rack, which currently supports our solar panels and surf boards, swaying side-to-side ominously. On telling Chris this, he said, ‘Oh, it’ll be fine. There’s no way it could fall off, not unless we have an epic storm tonight’, which was meant to appease me as it was at that point a gorgeous still evening with clear sky. However, later that night, guess what happened – yep, an EPIC storm with gusts of wind that seemed like they might blow all 5.5 tonnes of us over, which ultimately sent both of us out in the middle of the night to ratchet-strap the roof rack down!

Still, none of the issues we’re facing (there are too many to list!) are show-stoppers. Each one challenges us and we both feel like we’re being taught some kind of lesson here. I feel it is to trust – to trust in Moksha, ourselves, each other, the flow of life, and to loosen up and ride the wave of uncertainty that life is.

Anyway, it’s my birthday today and I’ve put in a request for pain au chocolats for brekkie – and if there’s one thing we can be certain of at the moment, it’s that we’re always in walking distance from a fresh French pastry… 🙂

Photos from top left, clockwise: the ill-fated Moksha cake (I learnt a valuable lesson – that, no, you can’t just substitute normal sugar for soft, brown sugar); view over Mercantour national park; Sospel centre; poshing it up on the Mediterranean near Nice; keeping cosy at night with the wood stove; hanging out in yet another industrial estate with Moksha, the poor relative of Mercedes. 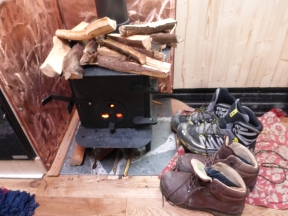 One thought on “Blowing a gale”