Ever since Maka Sankranti, which signifies the beginning of spring in Indian astrological terms, the temperature has been steadily rising in Mysore. And, given India’s unwavering faith in all things astrology, I don’t know why I’m surprised. But, blimey it was hot in the shala this morning, despite there being only four of us and despite a pleasant breeze moving the heavy air. I couldn’t help extrapolating these conditions and fast-forwarding to March, when temperatures will be much hotter and I will be sharing my copious amount of sweat with at least 80 other people in the main shala, which is known for the fiery energy of its avid practitioners. I think I’m going to need to buy some more towels…

Even the cows (still yellow) were a bit irritable in the heat today. Usually they completely ignore you, but this morning I was followed down an eerily empty side-street by a moaning cow with one bulging cataractic eye – it felt like I was being hunted down by a bovine zombie. And a friend was ‘attacked’ by a cow today too (well, it nudged her and its horn became entangled in her top and they had a bit of a battle to extricate themselves).

So maybe I can blame the heat for the shambolic nature of my practice this morning. Yesterday I had felt so inspired after the brilliant three-day experiential anatomy course with Ken the Rolfer, where we’d gone deeply into the anatomy of breath and bandhas, at an energetic level as well as the gross physical level. As I went to bed, I felt excited about the chance to put into practice some of what I’d learnt, like focusing on fully completing each exhale in every posture, which naturally engages the subtle muscles of uddiyana and moola bandha. In Ken’s words (I have so many brilliant quotes from him – but you have to say them in a laid-back American drawl):

But, then, this morning I didn’t feel quite such a bright-eyed, bushy-tailed spoddy student… In fact I felt like the sulky, rebellious girl at the back of the class who was going to try and bunk off at the earliest opportunity. I don’t think I even managed one jump through. I just wasn’t feeling it AT ALL and wrapped up with a half-arsed finishing sequence half-way through the class. Very unusual behaviour for me, but I just had zero energy, with no reserves of motivation to call upon.

But, to draw a positive from the experience, I didn’t give myself a hard time about it. I began to, but then checked myself and accepted that this is how it was today and that was fine; rather than spiralling off into negative free-fall, I decided to be happy with a simple explanation that it was hot, I probably didn’t eat enough yesterday and I was tired from the course. And I am sure my success in overriding irrational negativity with positivity/acceptance is a direct result of my current daily meditation efforts, which makes me happy… 🙂

Anyway, part-time yogi that I am, I’m off for another week’s holiday on Thursday to find a cooler climate. Chris and I have realised we are missing each other somewhat (yeah, I know – bleugh), so I’m flying up to Udaipur in northern India and hopefully we’ll be able to hire a Royal Enfield again for Road Trip Part 2. The flight will take 8 hours all in (with a transfer), yet I’ll still be in the same country – madness!

Finally, here are a couple of photos from the anatomy course and a couple of randoms taken on my way to practice this morning: 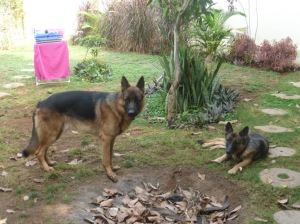 Sultan (his predecessor was called Tipu – see my previous post on Sultan Tipu) and Silver, the two enormous German shepherds in the beautiful, feng-shui-tastic garden where we had our course. The best kind of guard dogs: massively intimidating but soft as brushes.

And here are Ken the Rolfer and my friend Maria adding a sense of scale to Sultan’s imposing presence. 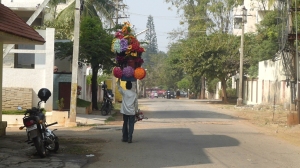 What do you call a man with plastic flowers on his head? (Insert answer here, because I couldn’t think of one:_______) 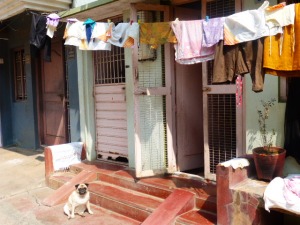 Somehow, India is the last place you’d expect to see a pug  – the incongruous little gargoyle (sorry, pug-lovers) fixed me with his beady eyes and watched me without blinking as I walked past. Sinister…

3 thoughts on “Feeling the heat”