Oh dear, I did it. I called Ken the Rolfer ‘Rolf” to his face by accident, in a Fawlty Towers ‘don’t mention the war’ stylee. Oops… Still, he was very cool about it:

“Oh it’s fine, I spent four months being called Rolf in Indonesia – they just didn’t get it.”

What a dude. Ken the Rolfer is the teacher of the ‘Experiential Anatomy’ course that I’ve signed up for – we had the first of three sessions today. He has an ageing Californian hippy vibe (and indeed this may be spot on) with his under-cut and top knot, and he has deep brown, soulful eyes that seem to look right inside of you. He also has an inspiring zen-like quality, in-depth body knowledge and awareness (from the gross anatomical to the cellular, energetic level) and the rare ability to convey immensely complex/esoteric concepts in a simple, clear way.

The course is right up my street – we’re ‘palpating’ ourselves and each other to really feel the muscles and bones (my suspicions about getting over-familiar with each other were confirmed when we were asked to prod our partner’s pubic and coccyx bones – although I have to say it didn’t actually feel intrusive at all). Plus, there are lots of links to the anatomy of yoga postures, and I love how Ken weaves in his ‘metaphysical fantasies about how things work’ (his words). He is clearly a very intelligent, thoughtful man and also has some interesting theories about the evolutionary reasons behind some of our bodies’ peculiarities.

Here are a few gems from Ken today:

He talked a lot about the difference of ‘core’ muscles and ‘sleeve’ muscles, the core being the muscles that support the axial skeleton (spine, skull and pelvis) and the sleeve being the muscles that move the appendicular skeleton (limbs). Core is ‘being’, sensation, stillness, internal, connecting with the resonance of the earth’s energy. Sleeve is ‘doing’, movement, force, external, stemming from mental instruction and emotional needs.

“It’s hard to open your heart if you don’t have stability.”

This was in reference to the functionality of the primary series in developing uddiyana bandha with all the forward folds and jump-throughs, which provides the necessary stability in the core to then advance to the intermediate series intense back-bends. Although, as I noticed was often the case with Ken, a whole world of more subtle meanings were wrapped up in this deceptively simple sentence, just dropped into the anatomical conversation.

“If you never work to your edge you’re lazy. If you constantly blast past it you’re crazy! Ashtanga is crazy enough already – there’s no need to attack it with ego and aggression.”

Love this – competitive yogis take heed! Ken shared his gentle approach to ashtanga yoga, where each posture is simply another chance to explore breath and bandhas.

We also did lots of practical exercises to instantly reveal some of the points he was making. Here are a couple you can try yourself:

He showed us that, when we take hold of the big toes in ashtanga standing postures (e.g. padangustasana, prasaritas and trikonasana), if we hold them tightly, almost making our hand into a fist, this immediately emphasises the exhale and switches on the bandhas more. And he’s right, it really does!

We also spent some time palpating (aka painfully pressing thumbs and fists into) the soft tissue on the sole of one of our partner’s feet. Afterwards he had us bend over into a standing forward bend, allowing the arms to hang down, and asked if one side of the body felt more open than the other. For all of us, the palpated foot side felt much more open, all the way up the leg, the side of the body and through the neck, shoulder, arm and into the fingertips. A great example of the connective nature of muscles, and how a simple foot massage can help to release someone’s tight shoulders.

The body never ceases to amaze me and, for me, someone like Ken, who perfectly blends the best of east and west, helps me to gain a greater insight into what we’re capable of.

So, all in all a brilliant first day – I am feeling inspired about my body, my practice, the power of yoga to transform our body awareness and I am buzzing for the next two days.

Finally, here are some pics of yesterday’s Maka Sankranti festival: 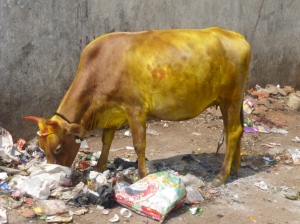 More yellow cows (how ‘anchor-butter’ cute is the second one?!) 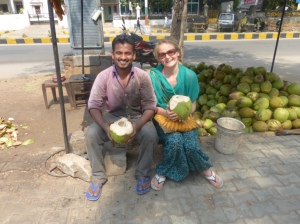 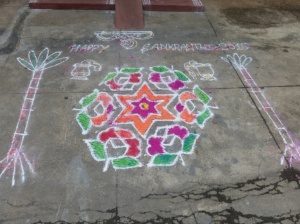 A particularly fine chalk pattern outside someone’s front door. I was told that creating these good luck designs first thing in the morning is an essential role of any good Indian wife. 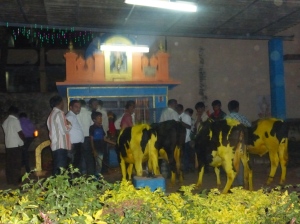 The jaundiced cows queue up to get puja’d at the temple in the evening. At this point we were rather bored/alarmed at the growing crowd of shoving men so we left, which meant we missed the festival’s highlight, where the cows are made to walk over fire. I was rather relieved about this, as the Hindu explanation that ‘the fire is good for the cows, for getting rid of parasites and keeping them warm’ was not convincing me, especially amidst the distressed bellows of these usually placid creatures. It’s a crazy old world…