Yesterday was all about teamwork. First of all, we took a cooking class with Manju, the gifted, maternal and all-round lovely cook at Mandira Cafe. It was great to enter the tiny, dark kitchen where all the magic happens, and watch Manju at work over the gas hob, taking notes and helping chop, grate and stir. Chris even gave himself a blister stirring the carrot alwa (a gorgeous, creamy, sweet dessert – see below) for the requisite half an hour – dedication! Here’s what we learnt to make:

I hope to bring these dishes to the UK on my return – place your orders now! 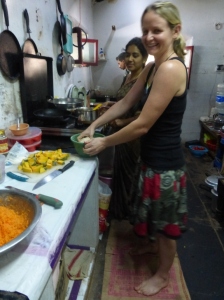 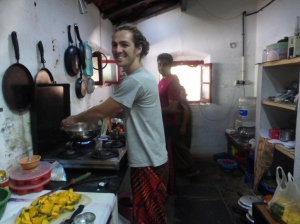 Chris works on his blister 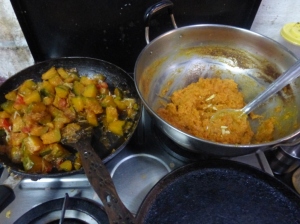 Pumpkin masala and carrot alwa – an orange feast for mouth and eyes! 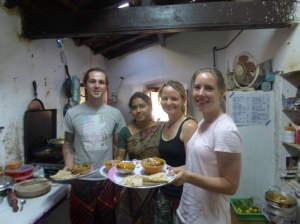 The next test of teamwork occurred when I managed to lock ourselves out of our room – it was bound to happen at some point! From outside, we could see the keys through the window on the bedside table. I shone a torch and Chris used a long piece of plastic to knock them onto the floor and drag them over to the window. Prashanth then supplied some wire, which he made into a hook and attached to a shorter, more sturdy pole. Chris then exhibited excellent ‘hook a duck’ skills by picking up the keys and I utilised my (slightly) smaller forearm credentials to drag the pole back through the window bars (windows are often barred in India for some reason). Job done! My initial sheepishness turned to a smug pleasure, akin to how I imagine the Crystal Maze participants felt on exiting one of the puzzle rooms with the crystal.

The final example of teamwork occurred just before bed as I was making a cuppa in the kitchen, this time exhibited by hundreds of ants. I seem to have become a bit addicted to watching ants of late – I find their complex behaviour so fascinating. On this occasion, I was struck by watching a huge, fat ant struggling to climb up the vertical wall, using the same ant run as hundreds of much smaller ants, who were having no problem zipping up and down. However, the big ant was just too heavy; it lumbered and struggled its way up to around a third of the distance, where it fell to the ground, exhausted. It did this three times, evidently becoming increasingly slow and tired with each climb. All the time, the little ants would dart in towards the ant and hover for a second before dashing off again. It seemed they were concerned for the big ant’s progress, and in my whimsical mind they were offering moral support, with calls of “Go on, you can do it!” and little air punches with their tiny fists. I confess that my own shouts of goodwill may have been added to their silent chorus… 😉

Anyway, the third time the ant fell down, it seemed to give up. At this point, the tiny ants increased in number, seemingly from nowhere, and a big crowd gathered round the big ant, almost obscuring its bulk beneath a seething mass. I couldn’t work out whether they were savaging it, or whether they were the support crew having a conflab about what to do, but my gut feeling was for the latter. Turns out I was right. Eventually the big ant feebly started climbing again, clearly absolutely knackered by now. But this time two little ants were assisting by dragging it upwards, apparently by its head, whilst a big throng pushed from beneath. Absolutely incredible to watch. I watched them make their laborious progress up the wall, working as one, until they finally reached a hole in the roof that clearly led into the colony’s nest.

On googling the weird phenomenon afterwards, we came to the conclusion we’d witnessed an ant colony emigration, which is apparently very common, and during which the worker ants make it their priority to protect the big, fat momma queen throughout the journey, often carrying her when required. Amazing! But I also discovered that ants are not always as social-minded as you might think – certain species regularly indulge in raiding, slave-taking, aphid-farming, regicide and mass murder! So there you go – high drama at the scale of the minutiae… 🙂