These lovely welcome messages lay at the outskirts of every settlement we passed through.

We noisily revved back into Mysore on the Royal Enfield (called a Bullet in India) yesterday after a fantastic road trip round the tranquil plantations of the beautiful Coorg region of Karnataka followed by two nights in the stunning jungle forest of Wayanad wildlife reserve in northern Kerala.

It has felt like a wonderfully refreshing break – I have been a complete yoga rebel for a whole week, not doing any practice at all and eating all kinds of lardy bready goodness and drinking beer and dodgy local spirits. Deliciously naughty… When we returned yesterday, I had that flat ‘back to work’ feeling, sulkily trying to zone out the endless yoga conversations amongst a group of newly arrived yogis at the cafe. Chris reminded me that it wasn’t so long ago that I had been filled with the same eager enthusiasm, having found I’d landed in yoga heaven where there seemed no limit to those with whom to chew the yoga fat! I sheepishly agreed, suitably admonished.

Anyway, as always with ‘back to work’, it’s never as bad as you think it will be when you finally get started. This morning, it actually felt great to get back on the mat. It was lovely to be welcomed back by Masterji, who was on top entertaining form today, and my fellow students. I took it nice and steady, was disappointed to find my back issue is still there when I drop back, but hey-ho – it will no doubt disappear as mysteriously as it arrived at some point.

For those who want to hear about our Enfield travels (including, sneak preview, an account of how we nearly died at the paws of a wild tiger – maybe…), read on.

Biker chick (possibly some creative licence going on in this shot…) 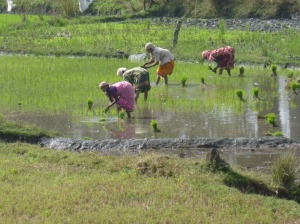 Chris amidst the coffee plants (there is some weird perspective going on here – coffee plants are not of such tryphid-like proportions in real life, neither is Chris a midget). 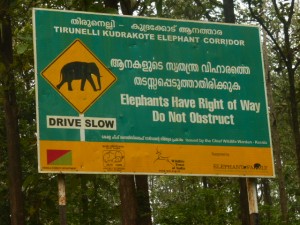 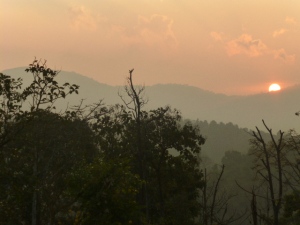