I found out yesterday that I hadn’t got in to study at the Pattabhi Jois Ashtanga Yoga Institute (KPAYI) in February next year and, since I applied, I’ve found out that obtaining a place is as fraught and nigh impossible as getting hold of Glasto tickets…

For those that don’t know, Pattabhi Jois is the man who devised the ashtanga system of yoga, therefore his shala (which is now grandly known as the Institute) is considered to be the true home of ashtanga. Pattabhi died in 2009, aged 93, and on his death the teaching at the Institute was passed onto his grandson, Sharath, and daughter, Saraswathi.

Nowadays the Institute is a huge, commercial affair. Pattabhi’s original humble shala in Lakshimapuram has been upgraded to a huge, fittingly institutional-looking building in the wealthy suburb of Gokulam, over-shadowed only by Sharath’s even more huge, ostentatiously custom-built home adjacent. Students flock here from all over the world to learn at the true source and, for many, to try and become ‘authorised’ to teach ashtanga yoga by Sharath. 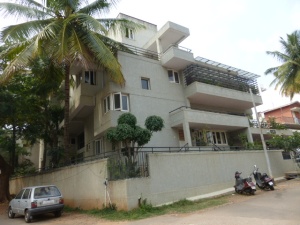 The rather formidable new Institute building.

In ashtanga yoga there’s a bit of an old-school monopoly going on, whereby no ashtanga teacher training courses are officially recognised by the Institute and its purist followers; the only way to become ‘qualified’ to teach the system is through authorisation by the existing guru at the Institute (currently Sharath). Authorisation will only come after showing commitment to regular study at the Institute (probably over a number of years, although rumours abound that you can accelerate the process by flashing some cash, and possibly some cleavage too). For a select few, who show extreme commitment, certification is also possible – to my knowledge, we only have one certified teacher in the UK – the brilliant Hamish Hendry.

Anyway, due to its international popularity, the application process is heavily prescriptive and very competitive. There are all kinds of jobsworth rules – like, you have to begin your period of study at the start of the month, for at least one month but for no more than three months, you can only apply to study between one and three months before your start date, you must arrive at the shala between the hours of x and x to register in person with approximately six million passport photos etc… (yawn). It costs around £300 a month to study there, which is admittedly quite cheap by UK standards, but ludicrously expensive by Indian standards (for example I pay around £90 a month to study with Vijay, and even that is hugely inflated compared to the locals’ price).

What all this means is that, on the first day of each month at midnight Indian time, there is a panicked flurry of applications for three months in advance – what is collectively termed a ‘scramble of yogis’.

But I didn’t know any of this when I applied over a leisurely mid-morning cuppa, UK time – I thought I was being really clever and switched on by doing it on the first day of the month. Ha! So it was no surprise that I didn’t get in, as apparently the system operates on a first-come-first-served basis, although, again, rumours abound that Sharath hand-picks each batch (yes, that is the actual term for each intake, like loaves of bread!) based on the passport photo that you have to submit with your online application.

In fact, there are all kind of rumours floating around Mysore regarding the Institute. It is as though there are two camps: the die-hard purists who wouldn’t dream of studying anywhere but the true home of ashtanga, and for whom a direct lineage to Pattbhi is paramount; and those who turn their nose up at any mention of the Institute, and who tell tales of its very un-yogic feel (I have to say I was struck by the shards of glass on the tops of the boundary walls, as if to keep out the riff-raff!), of bodies packed into a room with some people having to practise in the changing rooms, of huge egos vying for Sharath’s attentions, of receiving minimal adjustments, of being a number not a person, of being elbowed out of the way by those desperate to get to the front of the room to have more chance of being noticed and, thus, being authorised, etc.

As per normal, I find myself sitting on the fence. Yes, those rumours paint a rather hellish scene, which doesn’t sound like the kind of place where I would flourish. But I always like to find things out for myself and, if nothing else, can you imagine the fertile soil for social observation and all-out nosiness at the personalities involved?! Plus, I have dedicated more hours than I care to think about to practising ashtanga, so it seems fitting that I learn at its source at least once in my life. And, as always, I fall back on my ‘try (more or less) everything once’ rule, which I’ve always subscribed to and have absolutely no regrets about. For me, life is about seizing opportunities and gathering experiences – seeing as much of what this crazy world has to offer as possible, which inevitably includes the bad as well as the good along the way.

So will I apply for the March batch? Well, let’s just say you may see my concentrating face lit by the glare of my netbook screen at midnight on December 1st… 😉

And if I get in? Well, great, I will feel lucky to have been given the opportunity and it will be a new experience to be had. And if I don’t get in? Well, great – more time with Vijay, or for travel round India. I quite like leaving decisions to fate and, as with most decisions, it’s a win-win situation as long as you make the most out of the path you end up taking… 🙂