This morning we had our first led primary series class with Vijay – it was a sloooow count, and I swear he slowed down even more for navasana (the dreaded boat pose, where you balance on your bum in a V shape) and utpluthih (where you lift up onto your hands whilst in lotus and hold for an excrutiating final burst of pain before savasana). Chris said he caught Vijay’s eye whilst grimacing in navasana and Vijay gave him a big grin and chuckled to himself – sadist!

It was good though, despite tight calves from yesterday’s expedition up Chamundi Hill. I seem to be becoming slightly less like a lake of sweat with each class, so hopefully I’m starting to adjust to the climate.

This afternoon I have my first back-bending class with Vinay Kumar, Vijay’s elder brother. I feel like a massive cliché doing this intensive four-week course, along with almost every other westerner here, but it’s an opportunity not to be missed. People rave about Vinay’s teaching, and in particular his emphasis on letting the breath guide the postures and not the other way round. Plus back-bending is a bit of a sticking point for me, and I just know the course will do me all kinds of good, and probably not just on the physical level, such is the magic of back-bending.

What this means is that, as of today, I officially become a commuter, as I’ll need to get a rickshaw or moped lift to the Gokulum area of Mysore each day for Vinay’s class – around a 20 minute drive from home. This also means more trips on the mighty TVR, which I managed to grab a picture of earlier, before it disappeared in a cloud of dust and throbbing engine (ahem…).

I have managed to avoid being a commuter for quite a few years now, and it seems ironic that this now happens whilst being a yoga bum in India. But then again, I’m not sure I could be classed as a bum, given the rigours of my new daily schedule:

So poor Chris now well and truly becomes a yoga widow, and I may well become a gibbering yogi wreck…

Finally, I will leave you with this piece of ancient Indian wisdom, picked up at one of the hotels recommended by the Lonely Planet for food, where we had a very lacklustre meal the other night, then afterwards noticed a heaving, enticing street food area just round the corner, with delectable smells wafting through the air yet no mention in the LP, doh – lesson (re)-learnt. In case you can’t read the top bit, it’s a list of ways to prevent a hang-over, and only in Mysore would this list include pranayama – love it! 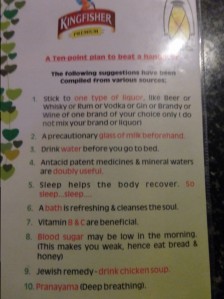 2 thoughts on “The slow count”