Well, so much for the much-anticipated lie-in… Despite new sheets, I slept fitfully and, as predicted, was woken at 5am by the orchestration of chanting (the bass line), muezzin (the melody) and Danny the dog howling (harmonies of sorts) – apparently from time to time he likes to provide enthusiastic accompaniment to the call the prayer.

Still, this afternoon we fought the urge for a siesta and instead went out on our first road trip – Chris has rented a scooter to see how it runs before he commits to buying one for his big trip. I believe it’s a TVS XL Super, which is a fittingly over-stated name for what is barely more than a push-bike – we’ve decided the Indians do not share the British tendency towards modesty…

It was a bit wobbly to get going with two passengers and at first I was a bit tense due to being acutely aware of the fragility of my human skin, the comparative robustness of the tarmac and the lack of any kind of barrier between the two. I couldn’t prevent the rise of various vivid images of the gruesome splat that would be left of me, should we crash. However, amongst the melee of others in the same boat (or rather scooter), I soon relaxed and began to enjoy being part of the ordered chaos and feeling the breeze on my face.

We headed out of the city towards Chamundi Hill, on the top of which is a famous temple. It felt great to leave the city and its honking traffic behind for a while, and find some relative tranquility. We paid 5p to park the scooter at the bottom, where a man was present to throw coconuts at monkeys, should they decide to invade your steed – money well spent, given the mischievous look in those macaques’ eyes.

There are over a thousand steps up the hill to the temple and boy did my thighs know about it by the end. Each step is daubed with little spots of coloured powder, religiously (literally) put there by the particularly devout as they make their upward pilgrimage. We also noticed lots of young couples, who looked away sheepishly as we passed in a ‘we’re not really here, honest’ kind of way – we figured this is one of the favoured hang-outs for illicit lovers.

The path was quiet, lush and mercifully shaded – dragonflies and butterflies danced amongst the canopy and jasmine bushes sprinkled the steps with their fragrant confetti. Half-way up was a giant tar-covered effigy of a cow with a family of macaques reigning supreme on its back. Worshippers pressed silver coins into the tar and queued up to receive honey and water from the holy man, who dished it out with  a spoon whilst simultaneously texting on his mobile phone. I was wondering whether it would be OK to take a photo then Chris pointed behind me towards a crowd of Indians holding aloft their clicking smart-phone cameras. Modern India indeed.

We were greeted at the top of the steps by a noble-looking cow, who stood on the threshold between the peaceful steps and absolute bedlam beyond.

I had expected a lone temple standing on a peaceful hill-top in reverential hush, but instead it was like a busy market-place, full of noise and gaudy colour. 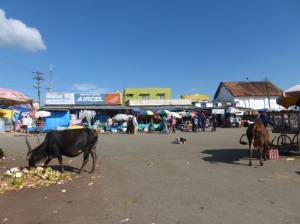 Hundreds of Indian families, the majority of which must have driven up on the road rather than taking the steps (these are clearly reserved for loved up teenagers and foolhardy foreigners), were descending on the temple and the surrounding food and souvenir stands, and the queue to enter the temple was ridiculous. The temple itself is a huge gold pyramid, ornately decorated with deities. Little bit OTT for my taste, but pretty impressive. 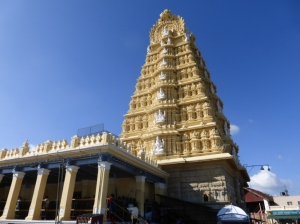 We were surprisingly the only westerners there and, for the first time on this trip, we received loads of attention. Chris was whisked away by a group of young lads to have his photo taken with them, with the word ‘tattoo’ coming through the local dialect loud and clear. He was then commandeered by a family, who wanted his picture with their young son. A bit of a crowd had gathered by this point, and Chris extricated himself with difficulty after a few more paps, and was left feeling rather odd about the whole thing. Note, no requirement for photos with the girl foreigner – charming… (I should have revealed my tattoo.)

Anyway, we made it back to the bottom of the hill in one piece but ended up with bizarrely out-of-control shaking legs – the car park man chuckled and said,

Yes, that’s exactly what they were doing, and it’s good to know we’re obviously not the only ones with inadequate quads. Yoga clearly doesn’t make you hiking fit… 😉