As a quick reminder, the niyamas are five personal qualities mentioned in Patanjali’s Yoga Sutras that we’re encouraged to cultivate within ourselves, to help us on our yoga path. In this article we’re looking at the fifth and final niyama: ‘Ishvara Pranidhana’, which means ‘devotion to God/ the divine/ the cosmos/ the universe/ the bigger picture’ – whatever this personally means to you.

Last week, when it came to preparing my final monthly yoga workshop, which focused on discussing this niyama, I felt a bit uncomfortable.  For a start, devotional faith is such a personal thing – who was I to tell anyone what it means? And, added to this, I’ve been on such a journey with this niyama myself, fighting it hard for a very long time, that I wasn’t sure I was the most measured voice to listen to on this topic! So, I ended up staying up late, writing and re-writing loads of ideas and notes, trying to get my thoughts in order and structure some kind of coherent but not too overbearing introduction to this vast topic.

Well, when I arrived at the workshop guess what I had left at home? Yep, you guessed it – all of my swotty notes! I couldn’t help laughing out loud – this was the best lesson in ishvara pranidhana I could have wished for! This incident forced me to let go of any illusionary sense of being in control and hand over to a much greater force and intelligence than mine – I had to surrender and trust, which is really what ishvara pranidhana is all about. So, I said an inward prayer, asking that the morning would go well, and got on with it – and it was, of course, fine!

In the end, I don’t think I would ever feel comfortable ‘teaching’ someone what ishvara pranidhana is, or indeed what any of the yamas and niyamas are.  I think the best thing I can do is share my own experiences and offer food for thought, and encourage people to begin their own journey of exploration into what these things mean to them, personally.  I do believe we all have all the answers we need within us, and the underlying truths are the same, no matter what path we take to reach them.  But, really, life is all about the path, the journey – and we can only do that ourselves!

As such, here’s a little story about my own experiences of coming to a place of understanding and deep appreciation of ishvara pranidhana.

Up until a few years ago, ishvara pranidhana had always been a bit of a sticking point for me; the other yamas and niyamas all seemed quite straightforward to me and I found they were naturally becoming interwoven into the fabric of my life as I continued down this yoga/inner path. But this whole worshipping and devoting myself to something I couldn’t see or touch was challenging my western logical, rational, scientific mind somewhat, and I was experiencing great resistance (ego alert!).

It wasn’t until I went on a five month trip to India in 2014, to immerse myself in yoga and attempt to dig down to its elusive source, that I began to appreciate the importance and huge benefits of ishvara pranidhana.  India is, basically, devotion central – spirituality suffuses every aspect of life, from the most mundane to the headiest, most esoteric heights. If you have any issues with devotion then, frankly, there’s no avoiding a confrontation in India!  And so it came to pass, that my egoic resistance to worshipping an unseen force was hugely put under the spotlight. I was utterly confused for a long time and, in particular, resisted the very yogic concept of the worshipped guru, i.e. the figurehead of a particular form of yoga/spirituality, who becomes the focus for devotional outpourings. This just didn’t make sense to me – they were just another person. Yes, inspiring, for sure, but I wasn’t going to start kissing their feet!

The first shift I noticed within me was when the psychedelic melodrama and endearing craziness of the Hindu deities began to pique my interest, and I came to feel a real fondness for these larger than life characters, and began to appreciate that, together, they represented all the different aspects of existence and life, both light and dark, and the wonderful stories were a platform to demonstrate all that we can embody ourselves.  Watching the unquestioned devotion of Indians, from all walks of life and all kinds of religions, began to move me deeply – I saw how their faith helped them, and how it brought families and communities together in a beautiful spirit of love.  One day I watched a sadhu (a holy man, who has dedicated his life to a service of devotion to god) performing a self-cleansing ritual at a temple.  It seemed to touch me deeply, in a place hitherto unknown to me and, inexplicably, I found tears pouring down my face.  The friend I was with looked at me. ‘Devotional tears,’ he said knowingly. I was astounded but, on some level, it felt true!

Then, following a moving encounter with an incredible, ancient banyan tree, where I seemed to feel its very life-force through touching its trailing branches, I had a revelation that I did have it within me to humble myself to a higher force, as this is what I felt in nature, and had in fact been doing on some level throughout my entire life. I realised nature was my temple!  It was a wonderful moment – finally I felt I ‘qualified’ as a true yogi as, before this moment, I had thought I just wasn’t able to embrace one of its central ethical tenets. (NB You can read the blog entry I wrote about this experience at the time by clicking this link.)

So, with all these new experiences and revelations, not to mention the heady spiritual cocktail of India working its persistent magic on me, I began to open myself up to the devotional or ‘bhakti’ side of yoga, which I had always been so suspicious of before.  I could see how it was so beneficial and popular with so many people, both Indians and westerners, and I had a feeling of, ‘what have I got to lose?’

I began to experiment and explore, putting myself out of my comfort zone by going along to devotional chanting evenings, attending devotional rituals at temples and even participating in a devotional dances for universal peace evening. I soon realised that, at some of these events, I felt rather awkward and uncomfortable – somehow the energy didn’t feel right. But, then, sometimes I would find myself with a group of people whose devotional energy was so pure and loving, that I couldn’t help but be swept along, and I found myself having some incredibly beautiful experiences, feeling real joy and love well up within me, and a deep connection to those I was sharing this experience with. I felt my heart beginning to open in a way it had never been able to before, because I was always suppressing something inside me. Devotional tears never seemed far away during that last month or so and I confess I did even touch the feet of Sharath Jois on my last day at the Ashtanga Institute because it just felt right – I felt moved to do so from a place of love and joy deep within me – who knew Becky May would do such a thing?! My ego certainly didn’t… 😉

I remember, on my penultimate day in India, after so many magical, love-filled experiences and many more revelations, often through ‘synchronous’ conversations and meetings with people, I was settling down to attempt to meditate on the roof terrace after my yoga practice, as I did most days. Usually, it was a battle to keep bringing the mad monkey mind back to the breath, endlessly, and trying not to become frustrated at my seeming inability to still the mind. But today, before I closed my eyes, I made a deal with myself, to trust in something bigger than me, to trust that there was a greater divine, benign intelligence running the show.  Then, part-way through my meditation, suddenly, things shifted dramatically. I felt a huge expansiveness, a feeling of endless space, and my mind emptied, just like that. Then all these beautiful, vibrant colours began pulsating in my mind’s eye, sometimes like a lava lamp, sometimes like a kaleidoscope – I had never experienced anything like it before. It was unbelievably beautiful and felt effortless and joyful to be in that space. I felt like I had finally allowed myself to step fully through a door I had been tip-toeing around and that my life would never be the same again.

And, in fact, I was right about that! I can’t begin to tell you how beautifully and magically my life has shifted and how my personal journey continues to grow and flourish in mysterious, joyful ways, since I made that deal with myself to trust in something bigger than me.  The magic and mystery was always there, but I had been blind to it, or rather my mind hadn’t allowed it to exist.  Now I acknowledge and honour it, it shows itself to me in myriad ways, and I feel so very supported and guided as I navigate my life-path. I do truly feel part of a bigger scheme, and I tell you, it’s like a weight lifting from my shoulders! And, the irony is, the more I trust and have faith, the more my faith is answered with irrefutable evidence that I am indeed supported. After all, we came into this world with everything taken care of, and our every breath miraculously appears without us doing anything – so, yes, as soon as you think about it, there’s definitely something invisible and magic at work here that we will probably never be able to explain!  But we can at least acknowledge it.

For me, I find this connection most of all in nature – if you take time to examine and appreciate the mind-blowing miracles and beauty of nature, at any scale, it doesn’t take long to feel absolutely humbled. I also increasingly appreciate that myself and everything else in existence is an integral part of this wonderful mystery, and with that sense of connection comes a profound peace that enters my life more and more.

In the end, I eventually realised that bhakti yoga and ishvara pranidhana are all about letting go of control. To truly open our hearts, which is the key to finding inner peace and enlightenment, we need to release our limiting egoic illusion that we alone steer our destiny and accept and honour a greater force than ourselves at play. And, once you do, prepare yourselves for a magical ride! 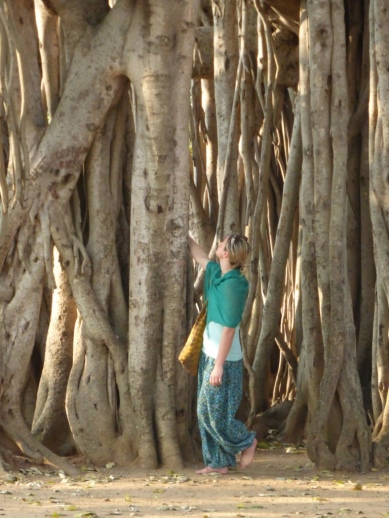 Becky and the magical banyan tree… 🙂

Becky and the magical banyan tree… 🙂