We did it – we finally left the very beguiling Luberon region of Provence. We were trying to for a while, but somehow another beautiful village perched precariously onto the side of a cliff or another ancient-looking footpath kept diverting our attention and we found ourselves lingering for ‘just one more night’. We managed to leave it very briefly a few days ago to visit a tool shop, but we were soon back, like moths to the light. It’s been a happy, peaceful couple of weeks meandering through the countryside at a very steady pace indeed, and spending as much time as possible outdoors, walking or biking through the aromatic garrigue vegetation, where wild thyme and rosemary tickle your nostrils, and amongst the endless lavender, olive and cherry plantations, now with a thick blanket of yellow and white spring flowers at their base. 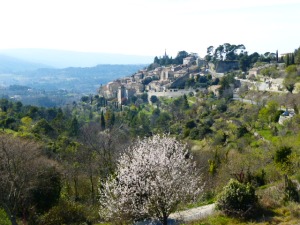 A particular highlight has been discovering the spectacularly surreal lunar-landscape of old ochre mines around the village of Rousillon, now reclaimed by pine forest. The mined areas have been twisted into strange formations of, frankly, phallic chimneys and crisp, undulating knife-edge ridges, thin as ice. The colours are staggering – from yellow to red to purple, contrasting brilliantly with the bright greens of lichen, moss and pine. We also spent an idyllic few days walking and biking through the climbing mecca that is the Aigue Brun valley, where sheer cliffs drop into fairyland, ancient woodland dripping with ferns and mossy boulders, whilst the river bubbles musically alongside. 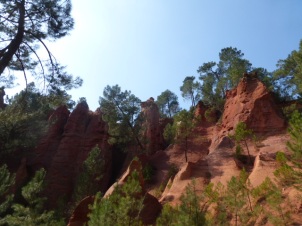 Looking out over the Aigue Brun valley.

In the mornings I am very much enjoying popping out to join the locals on a pilgrimage to the boulangerie for that most French of traditions: buying the morning bread. Then, there’s nothing better than eating it rustic style for lunch, with one of the mind-boggling array of cheeses that you find in any shop, no matter how small the village. We’ve had to rein in our intake of pain au chocolats though – it was getting ridiculous. Weekends only now (mostly)… 🙂

One evening, we arrived in a lovely little village, Rustrel, and found a quiet, grassy picnic area to park in overnight. No one was around, we had the spot to ourselves and enjoyed a peaceful slumber. The next morning we woke up surrounded by cars, in the midst of a heaving mass of excitable people. It turns out we had parked almost in the middle of the French equivalent of a car boot sale (they call it a ‘vide grenier’, which means ‘empty attic’)! So, we of course had to join in the fracas and ended up with a load of tat (1950s jerry can and fern lamp, anyone?) that we now have to find a space for in the van! Still, it was brilliant fun and lovely to watch the transformation of this sleepy place into a buzzing hotspot of activity and bonhomie.

Crazy brass trio entertaining the crowds at the ‘vide grenier’ that we woke up in one morning!

Another day we went for a walk up a ‘hill’ (it turned out to be higher than Snowdon, but hey ho – France is on a whole different scale from the UK and we’ve not quite adapted yet…) and, along the way, we saw one of the most bizarre natural spectacles that I’ve ever seen (and, as an ecologist, I’ve seen a few). On the ground were long lines of orange, hairy caterpillars, moving tortuously slowly over the ground, nose to tail. The longest line we saw was around 12 metres and we estimated it contained between 700 and 1000 caterpillars! Over the walk we saw thousands and thousands of the little critters – one line even seemed to have sealed itself into a circle, and we wondered whether the bugs would walk interminably round and round until the end of their days (but we didn’t dare interfere in case it was intentional?!). Occasionally, we saw a line terminate in a writhing mass of furry bodies, all trying to burrow into the soil – bizarre.

Later on I investigated and discovered they are the larvae of the Pine Processionary moth, whose hairs are actually quite a severe irritant to the skin and can cause a serious allergic reaction in some people (oops – we had been studying them at close quarters!), and which is a species spreading rapidly through southern Europe (not yet seen in UK) and is becoming a serious pest, as they defoliate the pine trees quite drastically – we’ve since seen loads of signs warning tourists not to go near them. The moths lay their eggs in pine trees and weave a protective layer of silk around them (we had seen these nests everywhere – they looked like giant spider webs) and when the larvae hatch they come out at night to eat the pine leaves. Then in March/April time they descend to the ground and form their strange processionary march to a suitable area of loose soil, where they bury into the ground and pupate into what amounts to a brownish blob for a few months. Eventually the rather disappointingly dull moths will hatch from the soil, live for around a day, mate, lay their eggs and the cycle starts again. Nature never fails to amaze me – completely bonkers, you can’t make it up!

One of the longer lines of processionary pine moth caterpillars crossing the road – Chris in there for scale! 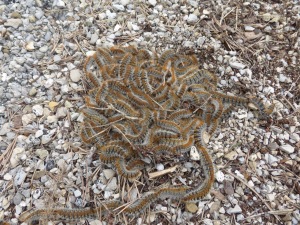 The weird burrowing behaviour at the end of the line. 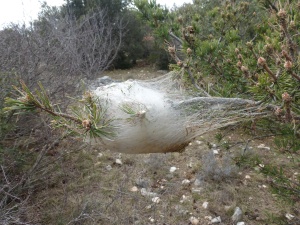 Caterpillar nest – about as big as a small football.

So, farewell Luberon – it’s been good – and now onto the next adventure. Our vague plan is to hop from national park to national park, until I hotfoot it to Paris in May to catch a flight to Turkey to teach my yoga retreat there. We’re now in the national park just west of Provence, Les Alpilles, and so far so good. Although lacking the sense of space and wide vistas of Provence, it packs a lot of drama into a small area, with its stunning, elemental landscape of limestone crags and pine forest.

So, finally I will leave you with a Moksha update: she has in fact been very well-behaved since her early strop – perhaps she too is enjoying this more leisurely pace… We had a breakthrough moment today, when we passed by a Mercedes truck dealership and didn’t go in! It felt good sailing (well, chugging) past, knowing we were all good for now… 🙂