Yep, I’m still in Gokarna. This place is like Hotel California – you can check out any time you like, but it’s damn hard to actually leave. In fact I’ve now enticed Chris here too – and so another fly lands in the sticky net of idyll.

Actually I feel Chris’s exploits need a special mention here as he recently successfully completed his bonkers trip on a step-through moped from the southern point of India all the way up to Delhi. I’m very proud of him and, for his part, his last words on the endeavour are a vehement, ‘never again’!

However, instead of attempting to ride the bike further north to Shimla in the Himalayas, which was his original plan, a combination of his rising paranoia about the malevolent intentions of honking truck drivers, a very sore ass and my siren-like whispers about the mellow joys of Gokarna life conspired to land him on my beach-side doorstep a couple of days ago, yay! This was superb timing as that very night a large rat fell from the roof of the bungalow onto my head in the early hours, and Chris was able to herd it out the room whilst I still babbled with post-traumatic stress on the bed!

I realise I’ve been a bit lax with updating the blog recently. I could mumble some excuse about patchy internet access (which is kind of true) but, really, I’ve just felt unusually, deliciously lazy. I’ve realised there’s a real skill to being lazy – I watch my neighbour swaying in her hammock listening to her ipod for hours on end, occasionally moving to the cafe for a drink then back to the hammock, and I salute her. Such soporific surroundings have helped me to slow down too, and it feels so good. As my mind has relaxed, my writing has started to go really well, and yoga too – small steps forward are becoming apparent during the daily morning class, and I realise the jump-throughs (on the good days) don’t feel like such an effort now. Things are looking up… 🙂

Meanwhile, this town has been hosting Shiva-ratri, one of India’s biggest Hindu festivals, and especially big here as it’s home to one of the Shiva lingams (a symbolic stone phallus – Shiva represents male energy) that are spread through India. It’s easy to avoid the crazy, noisy party crowds in town whilst living on the beach, but it’s been fascinating to occasionally dip into the spiritual melee. The streets have been lined with pop-up shops selling all things fried and sugary (interesting, seeing as the festival is supposed to include a prolonged fast), not to mention a whole lot of plastic tat, devotional souvenirs and blankets for all those families camping on the beach during the festival. In fact, with all the stalls and the flashing fairy lights adorning the temples, the town has morphed into a bit of a Shiva theme-park. But amidst the madness, priests, monks and brahmins calmly go about their business, carrying flame torches through the streets to light up the temple shrines, leaving in their wake a hushed serenity, even if just for the briefest of moments.

Unfortunately foreigners aren’t allowed in any of the temples due to disrespectful behaviour in the past, but I snatch glimpses of queues of devotees waiting to pray to Shiva deities, twinkling in candlelight, with the delicate scent of tulsi-water and incense wafting out onto the street.

In the meantime, I’ve been having my own spiritual explorations here – finally I feel I’m beginning to understand, in the most blunderous, amateur of ways, some of  the complexities of India’s spiritual psyche. I am merely scratching at the surface, but I’m enjoying observing, experiencing and learning. I’ve also really enjoyed my yoga nidra course and look forward to sharing what I’ve learnt when I’m back home teaching again. But more on that when I’m feeling less lazy – for now the ocean beckons for an evening swim before dinner… 😉

Finally, here are a few more photos of Gokarna to whet your appetite until next time… 🙂

The crop fields behind my home.

The smaller of the two huge chariots that are hand-pulled through the town during Shiv-ratri festival.

Old Rama temple on the headland, overlooking main beach, where my current home is. 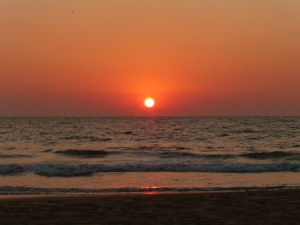 Another gorgeous sunset in the front garden.

Bringing in the fishing boats in the early morning.

Hauling in the boats with man-power alone.