So, after much indecision, I decided to get out of the city again for my last month of ‘freedom’ before practising at the KPJAYI shala  in March. There were a few raised eyebrows when I announced I was off again so soon, but I knew it was the right thing. It was time to move on from the cafe and time to leave the city behind for a few weeks – more than anything I craved sitting beneath a big sky and breathing sea air. Also, after a wonderful month of so much knowledge gained from Masterji, I felt ready to just work at my practice quietly for a while somewhere inspiring and restorative, before hitting the ‘main shala’.

I said goodbye to the legend that is Masterji with a lump in my throat, truly hoping I would practise with him again in the future. At a time when I have been floundering a bit with making sense of what yoga is to me, his kind, down-to-earth nature, steadiness and wisdom have been  an inspiring beacon of light.

A sweaty post-yoga Becky and the lovely Masterji

And so it was that I found myself, the only non-Indian, on what a friend referred to ominously as the ‘coffin bus’ to Gokarna – an overnight sleeper bus, which literally has bunk beds lining the narrow central aisle – crazy! 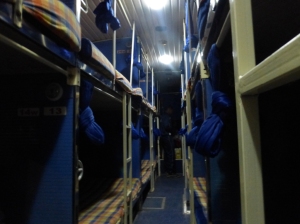 Inside the coffin bus.

I slept surprisingly well, and even when I woke for a while, disturbed by the bus’s frequent braking as it tackled the precarious switch-backs on a mountain pass, it felt magical watching indigo forested slopes slip by, lit by a full moon. A couple of times we stopped for ‘toilet break’, which was just the side of the road. I felt my feminist streak rise up in affront – where were we girls supposed to go? No way was I getting my white, western bum out in front of all those men! In the end we were granted one ‘proper’ loo stop (i.e. a squat loo in a dark shack round the back of a cafe), which lead to that most female of predicaments – standing cross-legged in an interminable loo queue whilst the men took a slash wherever they liked.

My arrival in sleepy Gokarna was heralded by the most beautiful sunrise I’ve seen in India yet (to be fair, I haven’t seen many!). It seemed like a good omen. After a few false starts I found my way to my friend’s yoga shala, where he’s teaching daily Mysore style ashtanga – I was just in time to join in, and it felt wonderful to stretch out like a cat after my cramped journey.

With help from new friends, I’ve found a lovely little bungalow with verandah right on the beach but only ten minutes walk to town (along the beach, of course). It’s peaceful and ‘shanti’ (I hear that a lot here, along with copious ‘namastes’) – the main sounds are the crashing surf and the breeze in the palm leaves. As I unpacked my rucksack and made home, I had a feeling I would stay here a while. Before I left, I deliberately didn’t make any firm plans, deciding instead to buy a one-way ticket and go with the flow. And I have a feeling that I might slip easily into Gokarna’s mellow flow and grind to a blissful halt.

Front garden (those cows get everywhere…).

As I joined the scattered crowd of hippies and European retirees on the beach at sunset last night I felt peaceful and happy and full of hippy love for the world. People were up to all kinds of things – meditating, strumming guitars, acro-yoga, an evening dip in the sea, a gentle stroll, crab watching (that was me – their shifty ‘sideways-ness’ makes me laugh and I was fascinated by watching them haul sand out of their holes, one blob at a time, pausing only to chase off, at mindboggling speed, any potential sideways marauders that came too close).

I am glad that fate has construed to land me here  – built-up city tension is fast draining away from my back and neck, and my limbs feel deliciously heavy following a good night’s sleep and the warmth of the sun baking my bones. Sometimes we just need to lift all burdens from our shoulders and be kind to ourselves; to let go of perceived obligations and duties, even if just for a short while (for example, the length of time it takes for the sun to set), and watch in surprise when the world doesn’t come to  a standstill. Sometimes we need to accept that the world doesn’t require us to do anything else except breathe and enjoy our surroundings. And, in fact, that very act is a gift to the world. 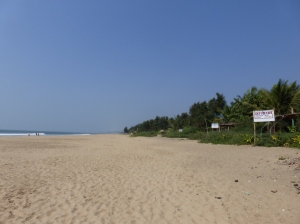 One thought on “Beach bum”