So, Chris has left to follow his own dreams for a while. The adventure began before he even left Mysore – first Harish insisted that we do one more perfunctory puja on the bike on the way to the station so we stopped at a temple whilst he administered high speed bindhis and prayers. Then it turned out the bike wasn’t allowed on the train to Bangalore that Chris was booked onto (even though they let elephants on for 60 quid – see below!). 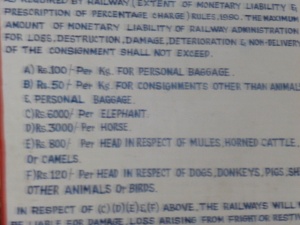 Still, after drawing a crowd of intrigued men (I think he will have to get used to this) and following lots of phone calls by Harish (definitely a good man to know), he managed to get himself and the bike a lift to Bangalore in a pick-up Tata truck instead, where he could make his connection with the sleeper train heading south, hopefully with the bike on board this time. 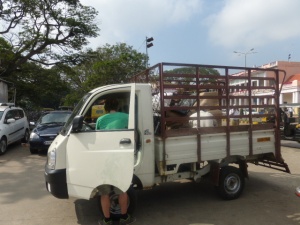 When I spoke to him last night he’d arrived at his destination at the southern tip of India – but his bike hadn’t! It’s on its way on another train apparently. I guess this is all part of the journey – when travelling you can’t get too hung up on schedules and aims; you just have to relax, ride the highs and the lows and have faith that all will work out fine. Sometimes the apparent ”disasters’ lead to the best experiences.

(As an aside, when I returned home after dropping Chris off, there was huge consternation at Villa Mandira regarding a massive bang that had come from our room and scared the life out of everyone. Yep, you guessed it – one of Chris’s bottles of ginger beer had exploded spectacularly, bursting through a plastic bottle and two plastic bags. There were two more ticking time bombs to dispose of, tight and distorted under the pressure – I gingerly (ha!) picked them up and threw them to the bottom of the garden. Prasanth had the balls to unscrew the lid of one, at which point the bottle shot through the air and hit next door’s wall like a bullet. After that none of us dared go near the last one, so we threw rocks at it until it punctured. When I told Chris this, still quite shaken up (ha again!), his biggest concern was that I hadn’t saved any to taste!)

Anyway back to my own yoga adventure. Being here alone means I can indulge my yoga-ness completely. Chris, bless him, was getting pretty bored of all the yoga talk, which is totally understandable – if you’re not really into yoga then Mysore is to be endured rather than enjoyed. So, I had a foot in the yoga world and a foot in the world of ginger beer, as it were. A good balance, I’m sure, but also a bit like being stretched in two directions, not able to fully commit to either. So now I’m here alone, I am prepared the tip the balance somewhat, so that yoga dominates for a while – it’s my chance to explore, question, experiment, learn. I’ve found I have many more questions than answers – there are so many contradictions, paradoxes, downright oddities of yoga in India versus yoga in the west. I am compiling all my thoughts in another rambling diatribe elsewhere – I shan’t unleash them on the blog until I’ve made more sense of my thoughts on it all!

Anyway, off to class now – I will post about how it’s going very soon… 🙂