I promise I’m not going to wang on about every puja that we experience in India, as I suspect the novelty might wear off rather quickly… But yesterday’s puja experience definitely deserves a mention. Actually, I didn’t attend the puja myself, but am acting as reporter for Chris and his new moped. Yes, that’s right – I appear to have been replaced by a TVS XL Super Heavy Duty as Chris’s new puja chum, as they went together with Harish to make offerings in the nearby Ganesh temple – and yes, the moped actually went in the temple…

So how did this strange event come about?

Well, Chris finally bought his steed for his imminent trip yesterday – almost exactly like the one we rented but much newer and better and with the intriguing addition of ‘Heavy Duty’ to its title. Harish helped Chris organise the purchase (unsuprisingly, it’s a beauracratic nightmare trying to buy a vehicle as a westerner) and, when it arrived, he said, “So we must make a Ganesh puja for the bike’, as if this was the most normal thing in the world. Which, it turns out, it is. It seems that an offering is generally made to Ganesh (remover of obstacles) when a new vehicle is purchased or before a long trip. Love it!

So, Chris trooped down to the local Ganesh temple with Harish and Hidalgo (the new steed has been named), along with a random assortment of offerings including coconuts wrapped in tin foil, incense and flower garlands, and they joined a queue of other vehicles and their owners inside the temple – there was even a new ambulance in there. When it was their turn, the pujari (brilliant name) took the keys and asked what vehicle and which people the blessing was for. He then passed on the offerings to the temple’s Ganesh deity and did his holy-man things, which included directing Chris to chuck some rice at Ganesh and walking round the bike wafting holy smoke over it. Meanwhile his assistant was pimping out the new vehicle with bindis, an om sign, a lucky lime (we couldn’t work this one out) and marigold garland.

Outside the temple, the assistant then smashed a coconut onto the ground next to the bike (like the lime, the symbolism of this is as yet a mystery) and they were finally waved off on their way, complete with Ganesh’s blessings and protection. Ganesh is probably my favourite Hindu deity (he laughs a lot and has an elephant’s head, duh) but I’m not sure his alleged obstacle removing will stop me fretting about Chris meeting an obstacle at high speed on those dodgy roads. But it certainly can’t hurt… 😉 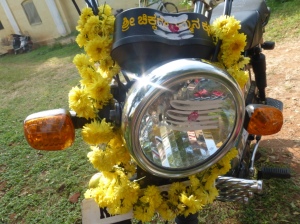 Close up – bet you didn’t expect to see a bike with a bindi today! (I also like to think that the gleaming ‘ting’ on the headlamp is Ganesh revealing his reassuring presence… ;))

2 thoughts on “Every day’s a puja day”